I am not a food blogger. To me, whatever tastes good and fills up my stomach is all I need when it comes to food. HOWEVER, I do like to blog about Scandinavian things, especially things that are Swedish. So today I am a one-off food blogger because today, I went on a 1.5 hour trek to Manly just to devour and savour the beauty of Swedish food. And it was awesome.

I first heard of Fika Swedish Kitchen from Rachel (go follow her on Instagram) because she likes to tag me in miscellaneous Instagram posts and I was like, “OK, got to go here and revel in this little Swedish culture hub” and today we finally took the plunge. It took a lot of effort because I’ve been such a lazy buttface and the thought of having to travel for 1.5 hours just to eat food really exhausts me. But whatever, adventure awaits yada yada. So we drove to the nearest train station, took a train to Circular Quay, took a ferry to Manly Wharf and then walked around a little bit lost until we finally stumbled upon the quaint little Swedish café. And I died a little inside.

Because it’s just so cute. It’s just so Swedish. I’ve finally found my go-to place in Sydney. Except that it’s freaking 1.5 hours away.

Anyway, I’m pretty sure most of the staff that served us were not Swedish, and if they were then they have a very strong Australian accent. Rachel and I ordered drinks- her, a coffee and I, a nice glass of lingonberry saft. 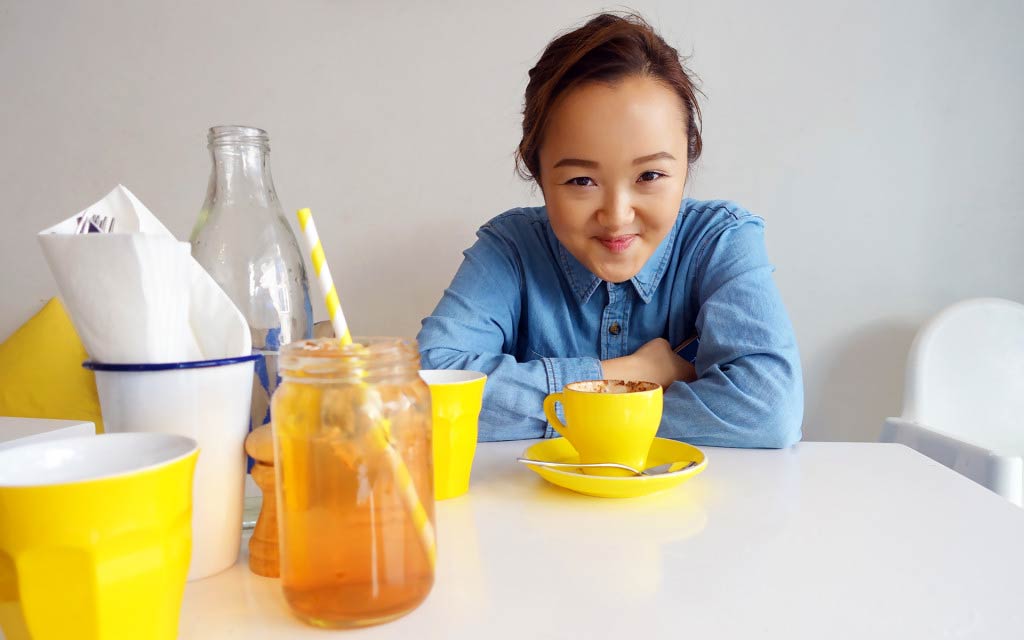 Isn’t Rachel positively adorable in the above picture?!

They were playing actual Swedish music in the café and I had half a mind to ask them if I could have a copy of their playlist, but I didn’t because I have introvert issues.

We ordered some pretty darn good food- A Swedish Breakfast Tray for Rachel, and a Smørrebrød for me. Yes, I know, they use ‘ø’ instead of ‘ö’ … not very Swedish if you ask me. But apparently Smørrebrød is Danish, so whatever. Fika Swedish Kitchen? More like Fika Scandinavian Kitchen. 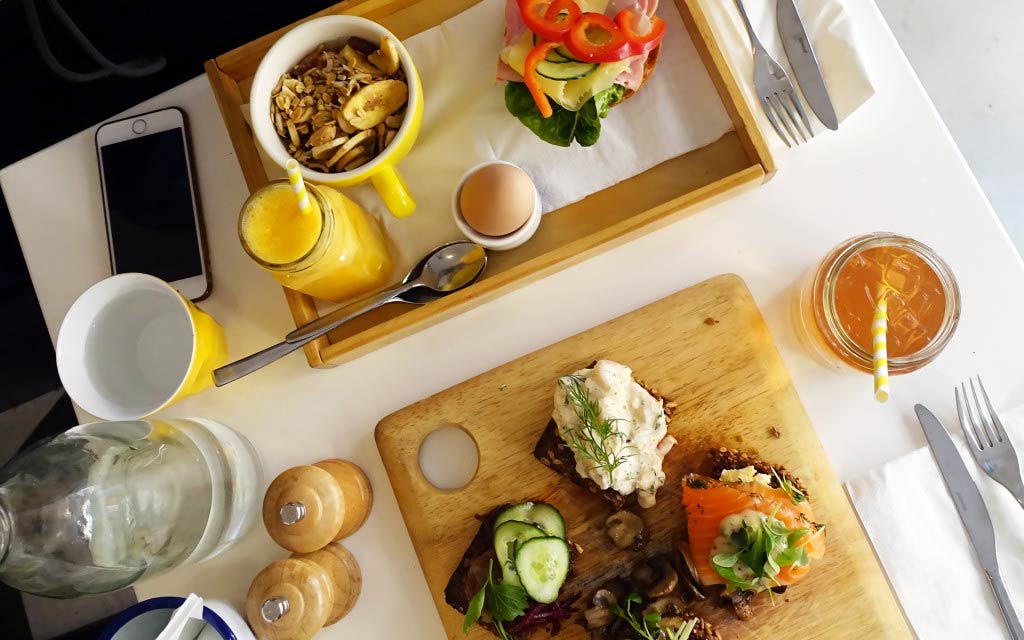 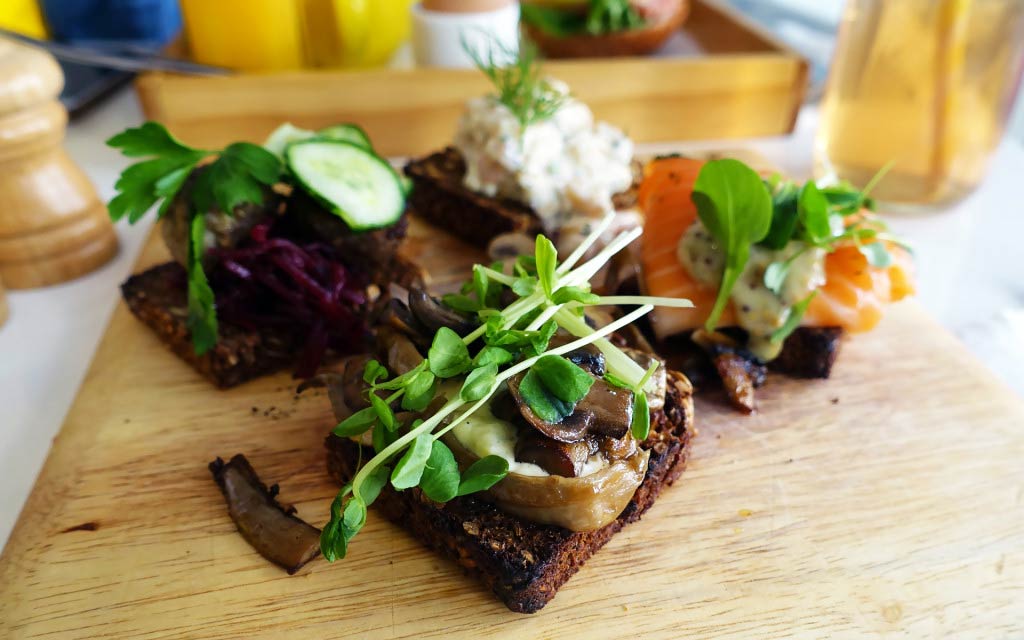 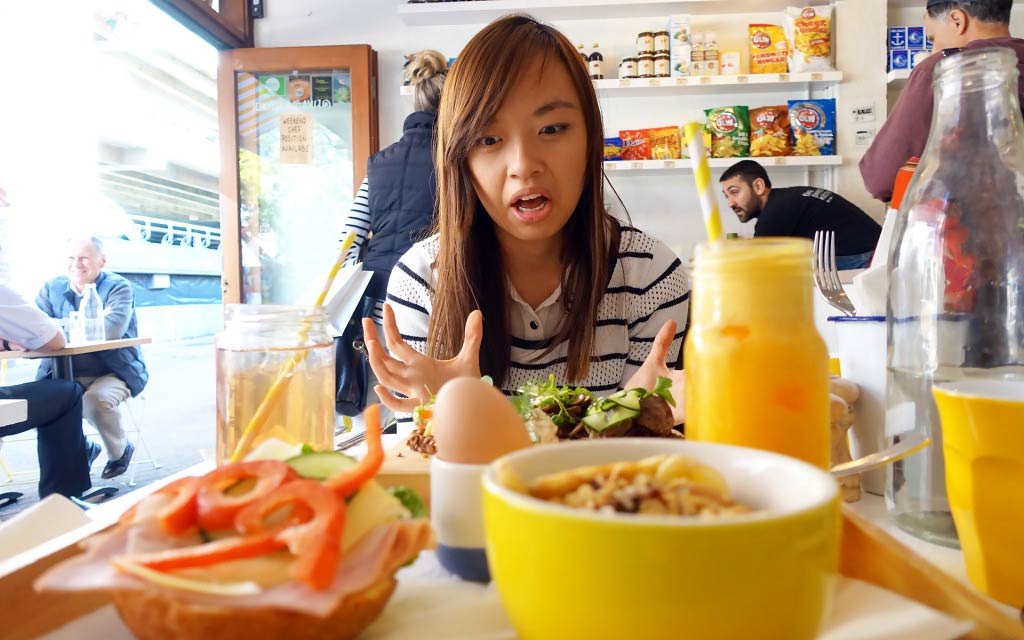 If you look behind me, the café also sells Swedish confectionery, OLW chips and “Sveriges mest köpta bil” aka Ahlgrens Bilar. At this stage I’m just in Swedish heaven.

For dessert, Rachel ordered the classic ‘kanelbulle’ Cinnamon Bun and I ordered a Raspberry and Rhubarb Crumble. 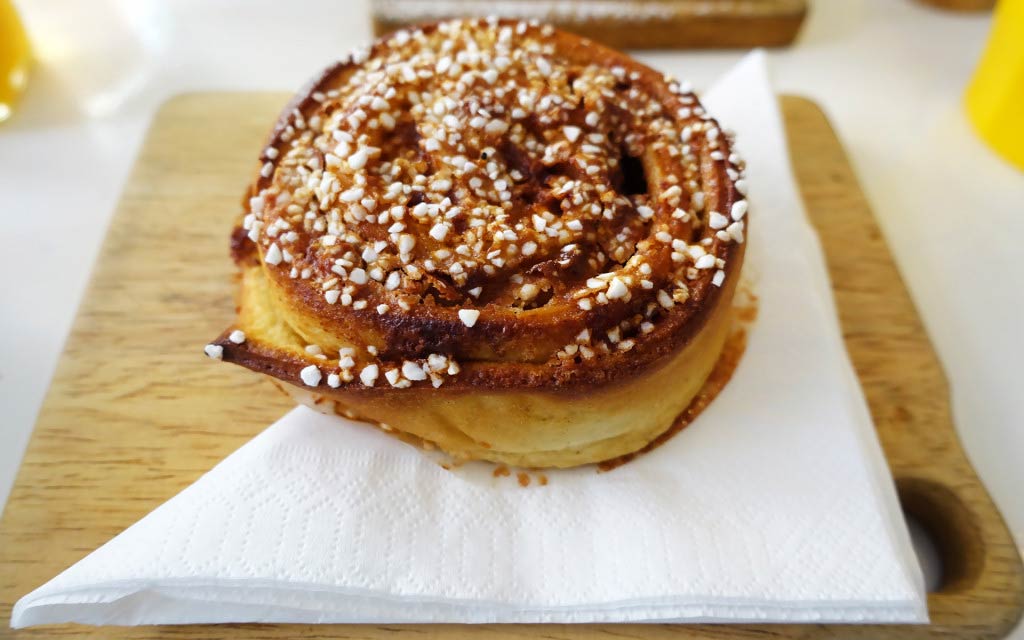 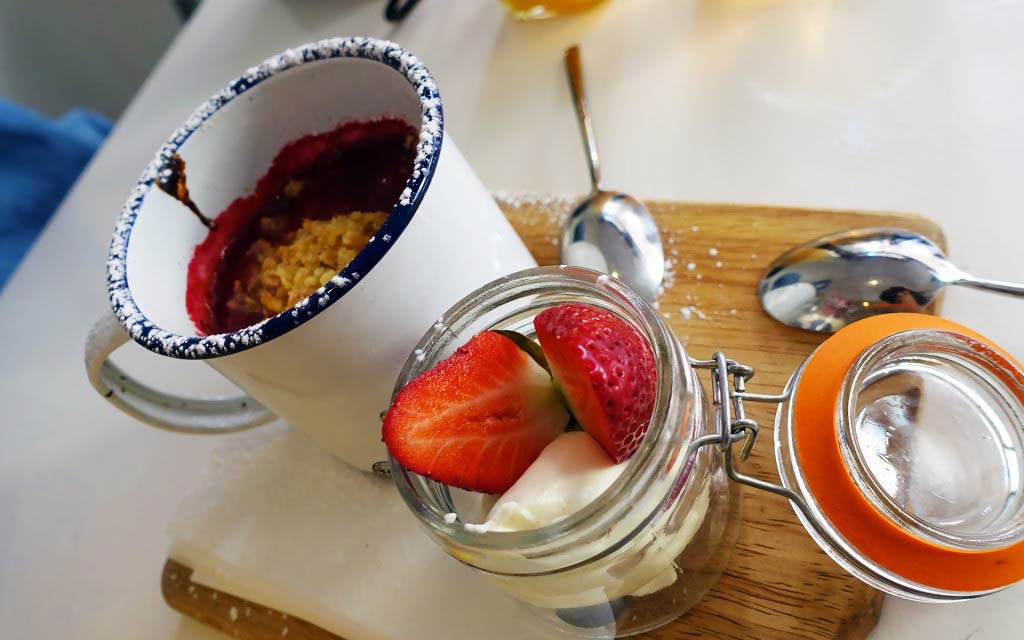 I ordered the Rhubarb Crumble because my Swedish friend Jakob was bragging to me on Skype about his awesome rhubarb pie and I was like “Ew, rhubarb?!” and he insisted that it was nice. So, there you go Jake, I ate rhubarb for you. And it was really good. 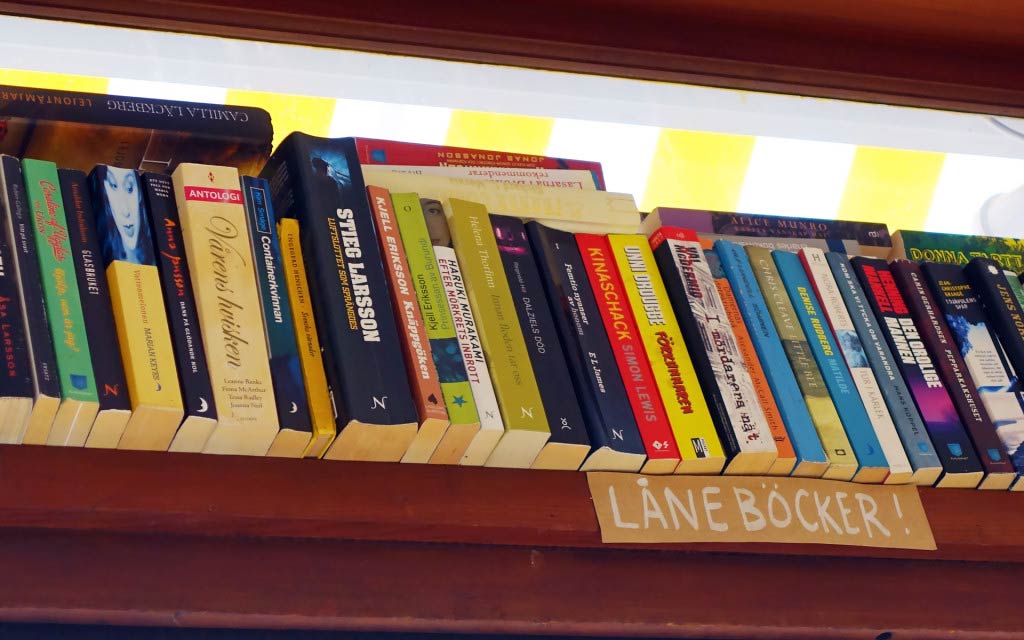 Overall, the décor of the café was charming, very Swedish with lots of Swedish things. They’ve definitely got the blue/yellow wood/white thing going on. They even had a cute little shelf above the entrance where you can loan books to read, in case you want to be all hipster and whatnot.

We spent almost 2 hours at the Fika Swedish Kitchen just taking photos of our food, eating, talking and being awesome. And then we were way exhausted and made our way back home like the lazy potatoes we are. But here’s a pretty picture of us at chillin’ at Manly Beach: 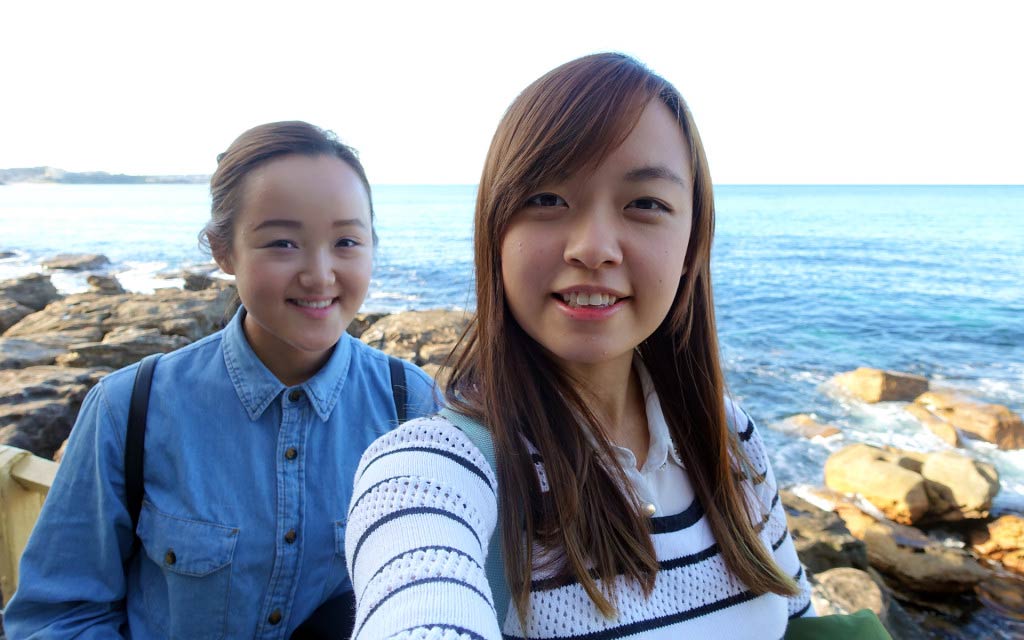 And here’s an equally pretty picture of the Sydney skyline: 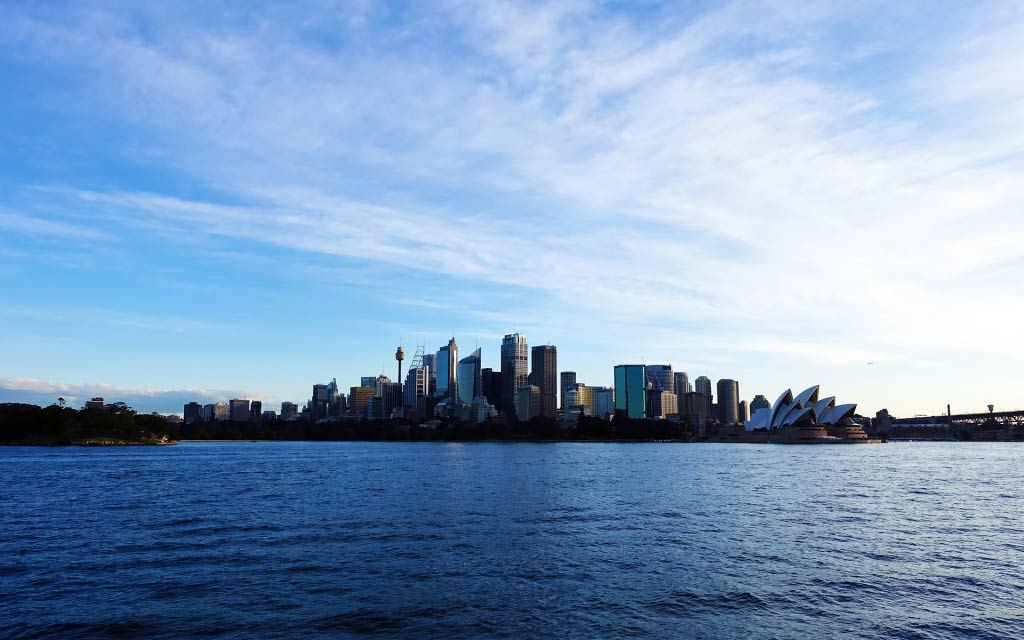 I got no complaints.

Sorry that I suck at food blogging, I’m not great at describing tastes and stuff, but all I can say is that it was really good, really fresh, and left my wallet feeling considerably lighter. Maybe when Mattias comes to Sydney we should start up our own little Swedish café… not a bad idea!