ERMAGHURD. HOW GOOD WAS IT?! How AMAZING was IT?! Sorry, just casually fan-girling here. So, waking up at 4:30am has never been easier- I mean, who wouldn’t wake up at 4:30am, make themselves a cup of mint tea and cuddle up to blankets and Eurovision merchandise just to watch the whole event live? Oh, it was fantastic.

So the whole event started off lovely with Conchita Wurst once again rising like a pheonix (although admittedly, I was too busy trying to sort out my setup to watch it… I had the Australian broadcast on my TV and the Swedish broadcast on my laptop, as well as Mattias watching diligently on Skype, like the wonderful boyfriend he is).

It’s actually been two years since I’ve watched the Australian broadcast- so it was nice to hear Julia and Sam’s slapstick humour and commentary, although at times I really wish all the commentators would just be quiet so I could hear what the hosts were saying, but whatever. Also, they gave so much air time to Guy Sebastian, so I wouldn’t be surprised if the whole thing is set up for Australia to win this year.

Anyway, I’m just going to give my thoughts on the countries that participated tonight: ~

LOL HIS SHIRT CAME OFF LOVE IT! What a start!!!! #MDA #Eurovision

I’m super sad that this song didn’t make it into the finals! I think it would have added so much to the show, especially with the cheesy police uniforms and when they ripped off his shirt to reveal his abs. The song is like a 90’s boyband flashback, only better!

This song doesn’t really do much for me. Doesn’t stand out amongst all the other songs. I think the Australian commentators said something about them resembling the Starks from Game of Thrones. I lol’d.

This is my number one favourite song this year and I really want them to win. I just love everything about it- the performance was intensely captivating, the song is catchy and Loïc manages to melt my already melted heart with his big eyeballs that just gazes straight into my very soul.

I had to re-watch this because I couldn’t remember their performance. It must suck to have come so close to winning last year, to not even qualify for the finals this year.

In all honesty, I’m pretty sad that this song didn’t make it to the finals. I really like strange things and this was definitely strange. I mean, for a minute there, I really thought I was in the depths of hell. The whole thing felt pretty satanic- good thing it only lasted for 85 seconds.

I’ve never been a big fan big of dramatic ballads sung by a single female in the middle of the stage whilst casually being blown away by the wind machine as they gaze longingly down the barrel of the camera. She has a strong voice though.

#EST has a pretty song and captivating staging #Eurovision

Really captivating performance and acting by Elina and Stig. The staging was superb. I have nothing bad to say.

Giggle. I giggled throughout the whole thing. It was just one huge giggle fest. Dance moves on point, Mr. Kajmakoski.

Genuinely confused throughout the whole performance. Doesn’t she remind anyone of a slightly larger version of Snow White/Mary Margaret from Once Upon A Time? Anyone? Just me? 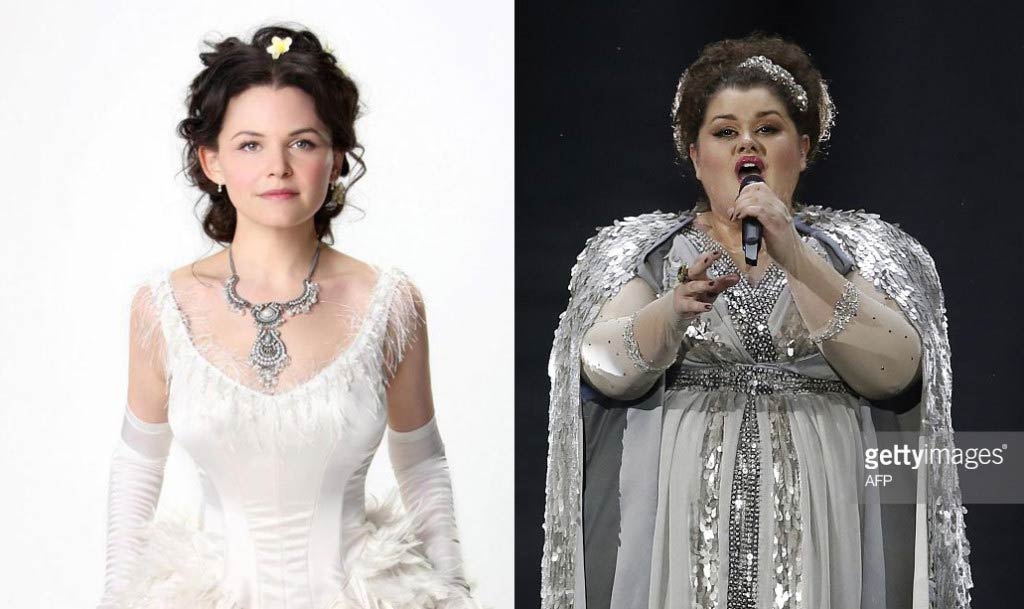 10. Hungary
Boggie – Wars for Nothing

A nice little song about war being bad. Pretty message, pretty song, pretty girl. It got better when the backup vocals kicked in.

Nothing really stood out to me in this performance. Nothing to be missed in the finals. Let’s move along now.

I still stand by the fact that I’m not a fan of ballads sung by single females in the middle of the stage… but Polina definitely has an epic Disney Princess vibe going on. Did anyone else notice the plethora of rainbow flags being held up during her performance though? Thought it to be a bit ironic, but that’s what I love so much about Eurovision.

13. Denmark
Anti Social Media – The Way You Are

Again, another song that I’m sad didn’t make it into the finals. It’s such a happy and cheerful song! The Nordic countries didn’t fare too well in the first semi-finals, did they?

I feel very conflicted about this- I think the song is really pretty. I think she’s got an amazing voice (a little bit pitchy at times, but that’s to be expected in a live performance)… but I don’t think it translated well on the Eurovision stage.

Out of all the other songs tonight (excluding Belgium), this one really stood out to me. I was pleasantly surprised by how nice the song was! At first I didn’t really like the tone of his voice, but the melody and the message of the song really touched my heart. I’ve added it to my all-time favourites Eurovision playlist. Bravo Romania! Bravo! (I’m also a sucker for songs sung in a national language).

Nice, strong performance. Nothing to fault. Reminds me a little bit of Loreen.

ANYWAY! I can’t believe Semi Final 1 is already over!!! It all happened so fast!!! I actually VOTED for the first time!

I voted for BELGIUM because Loïc Nottet is everything. Haha. I like how the Eurovision producers left Belgium last to qualify for the finals- I almost had a coronary worrying that they didn’t make it!

LOL SNEAKY #EUROVISION, I GOT SO WORRIED THAT #BEL DIDN'T MAKE IT THRU. OK. WELL PLAYED. GG. Goodnight Europe. I need to sleep lel.

For those who were absent, these were the countries that qualified: Albania, Armenia, Russia, Romania, Hungary, Greece, Estonia, Georgia, Serbia and Belgium.

I went back to sleep after watching the broadcast and I woke up at like, 2pm… but it’s all worth it. I can’t wait to do it all over again for Semi Final 2 and of course, the finals!!! ARE YOU PUMPED?! I’m pumped.

Semi Final 2 should be amazing- lot’s of stand out performances (*cough*Sweden*cough*Norway*Cough*Azerbaijan*cough*).

If you haven’t already, check out my ‘Why I Love Eurovision’ video where I explain in 5 reasons why I love Eurovision so much!

Also, if you’re interested in hearing my Eurovision Favourite’s playlist on Spotify, here it is: