I don’t even know how to start off writing this blog post. It’s like these measly little worlds swirling in my mind are inferior in describing the experiences that I’ve had during my time in France. But that’s okay! Because I have photos. Plenty and plenty of photos.

On Friday morning, we woke up at 5am in the morning to catch a train to Genève in order to catch our 7:11am train to Lyon, France. There were six of us all up from Switzerland heading to France—3 from Lausanne, 2 from Fribourg and 1 from Neuchâtel. We arrived safely in Lyon where my lovely friend Cindy met up with us (she’s doing her one year of exchange in Lyon) and headed to her apartment. Already, the French air was sending shockwaves of excitement through my skin! (That or it was just really, really cold). 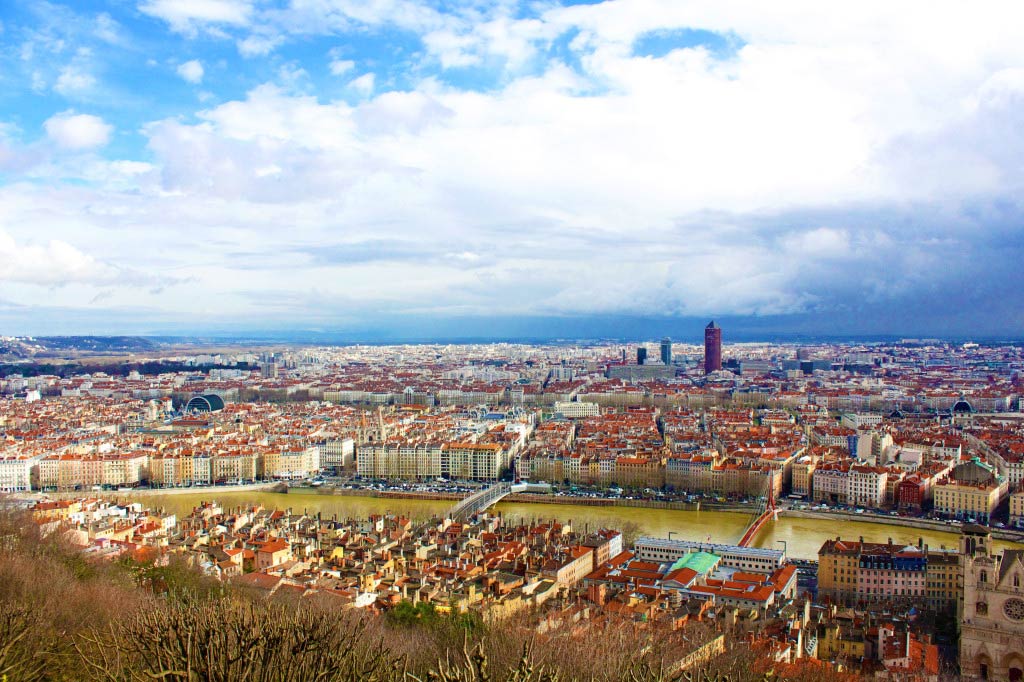 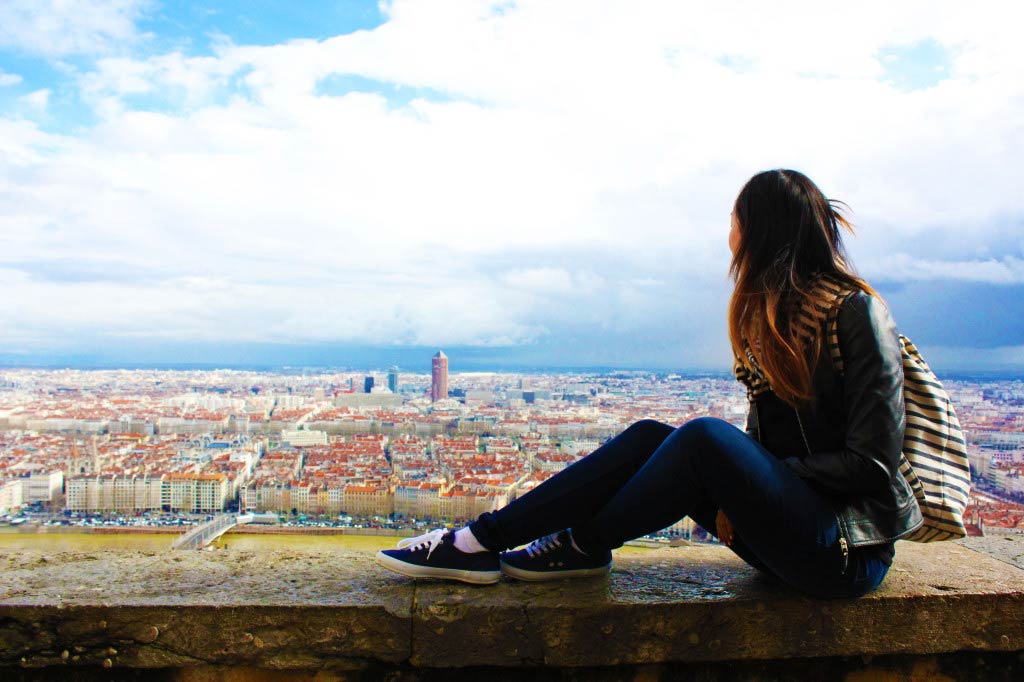 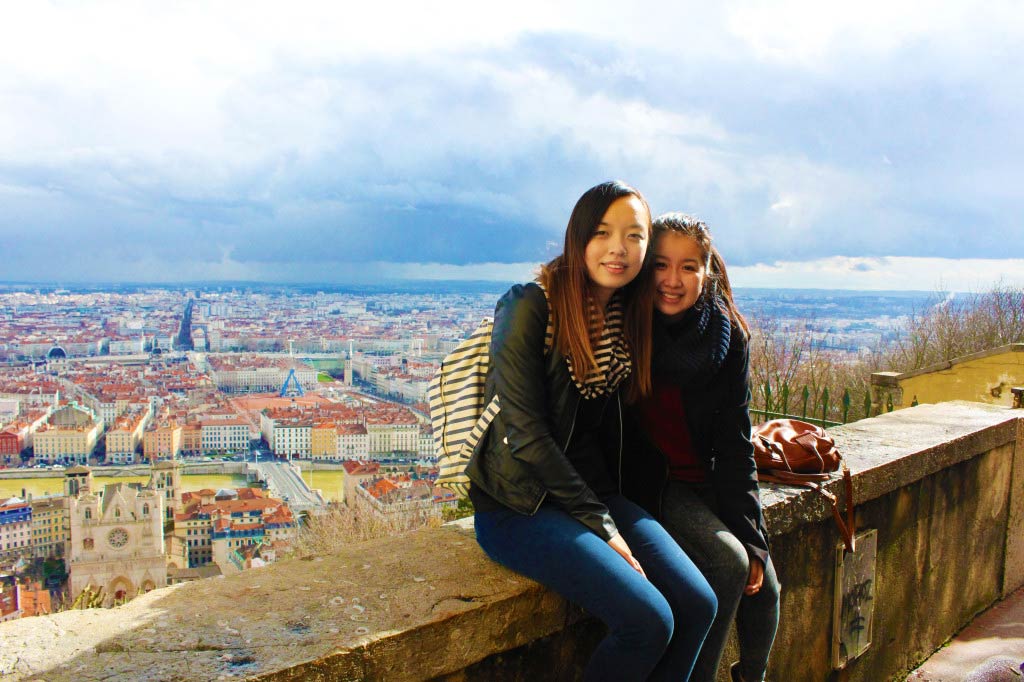 We walked around Lyon (soo much bigger than Lausanne) and us Swiss peeps were dumbfounded and mind blown by the cheapness of everything! So after doing a bit of sightseeing, we went on a shopping spree. Clothes, makeup and boots were bought that day. 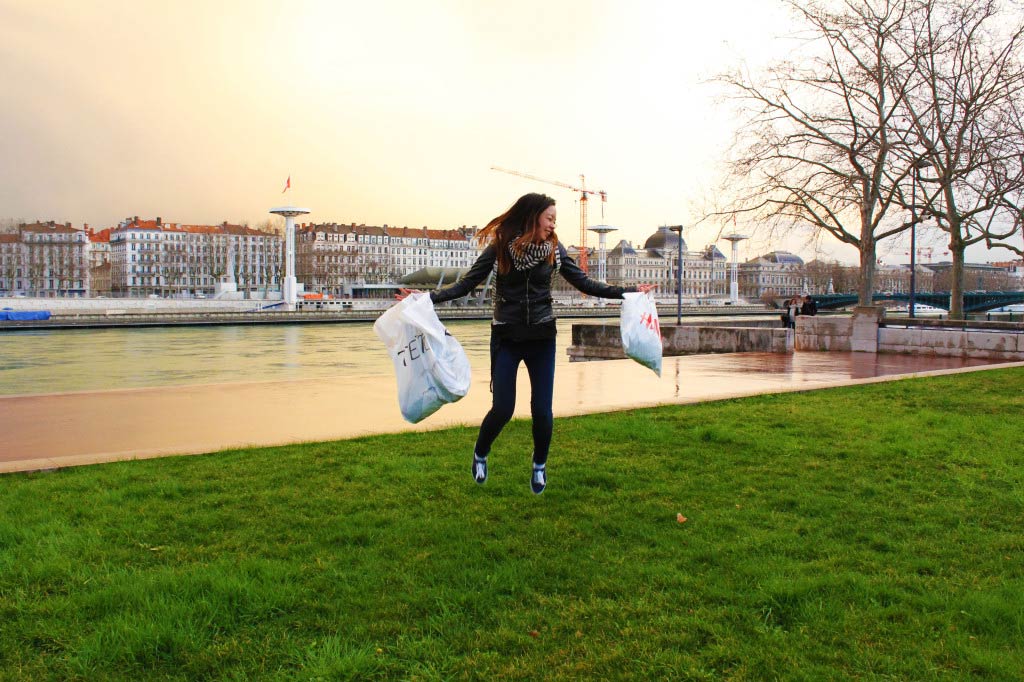 We had dinner with the other Lyon exchange girls- a 3 course meal costing us only 14 euros! GOOD JOB, FRANCE! 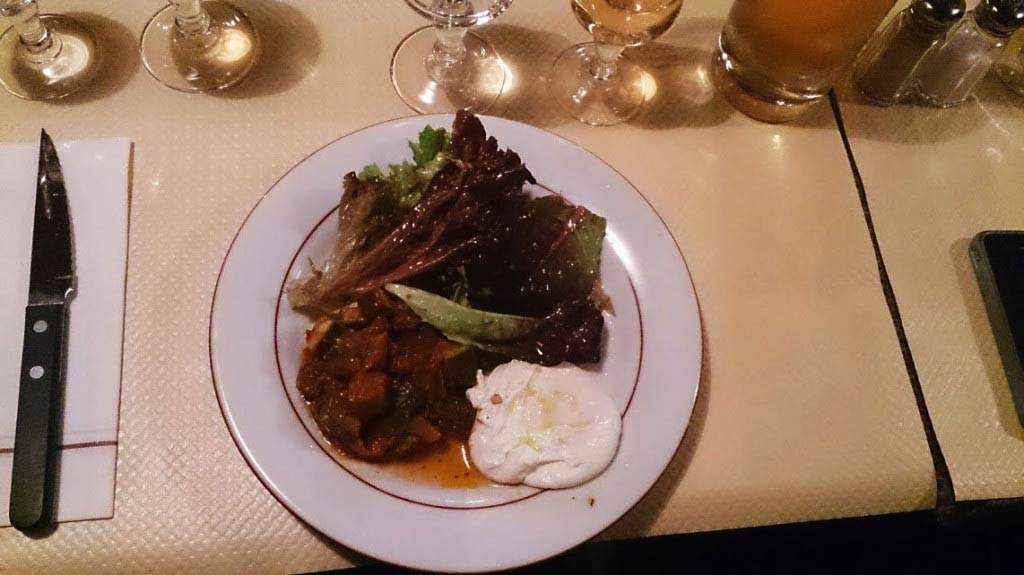 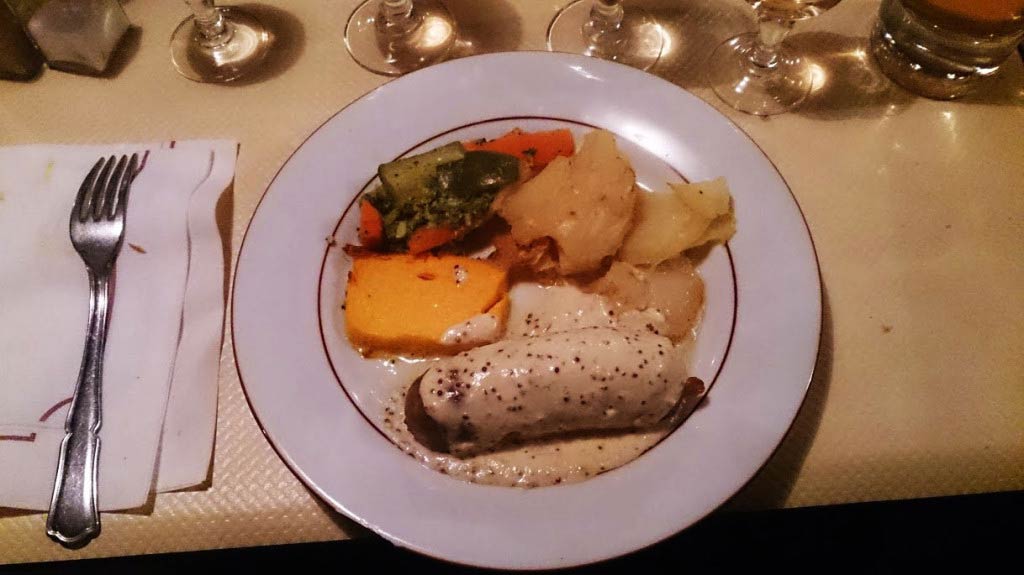 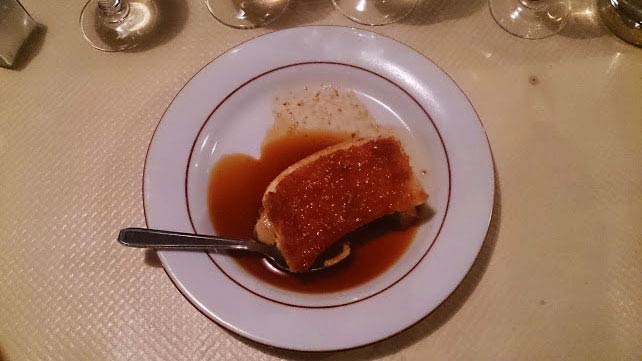 We walked around the city after only my feet were dying because I had decided to wear my new boots out. Heels + cobblestone streets = not a good idea. We went back to Cindy’s apartment and got the air mattresses and sleeping bags out. We tried to sleep early so that we could catch our 7:16am train to Paris. 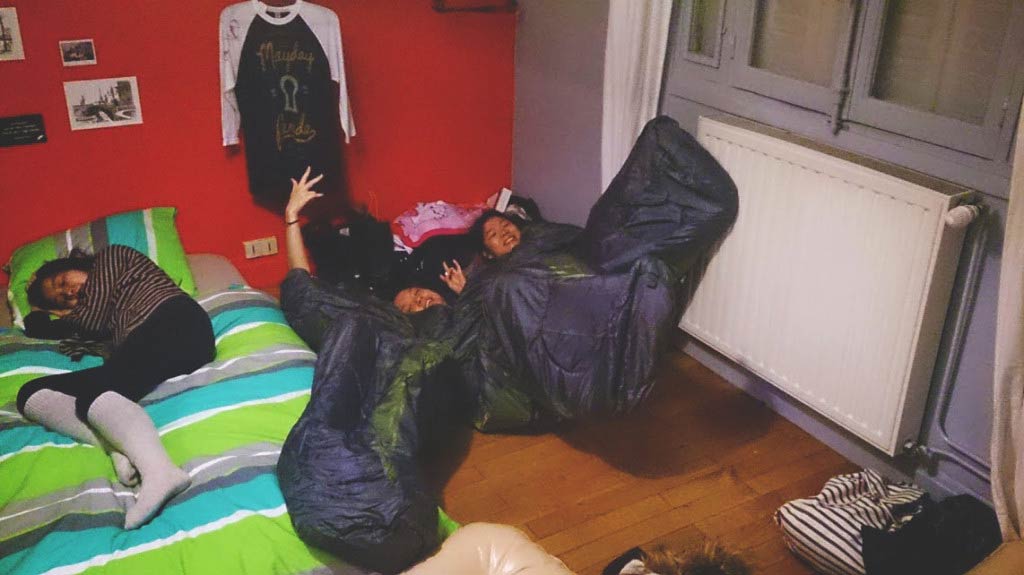 The next morning- with little to no sleep either thanks to the cold French air or the hard French floor (Kay ended up sleeping on me sometime throughout the night), we drowsily made our way to the train station- after having to jump the hospital fence with our luggage (it’s the shortest way to the train station #notbeingillegal).

We made it to our platform in time and when 7:17am rolled around, an announcement sounded- something about “train” and “supprimer” a.k.a. our train got cancelled a minute after it was supposed to arrive. GOOD JOB FRANCE.

We managed to get on another train that was super packed so we all had to split up to find seats. We actually arrived 3 hours earlier because we caught the TGV- so we were all super tired and grumpy because we didn’t get to sleep a lot on the train. It was bittersweet, arriving in Paris but being super exhausted.

In Paris, we met up with Kay’s long-lost-relative Gilbert and we were all super thankful because he was essentially the tour guide for the next four days! He let us leave our luggage at his apartment so we could go do touristy things- a.k.a. shopping. 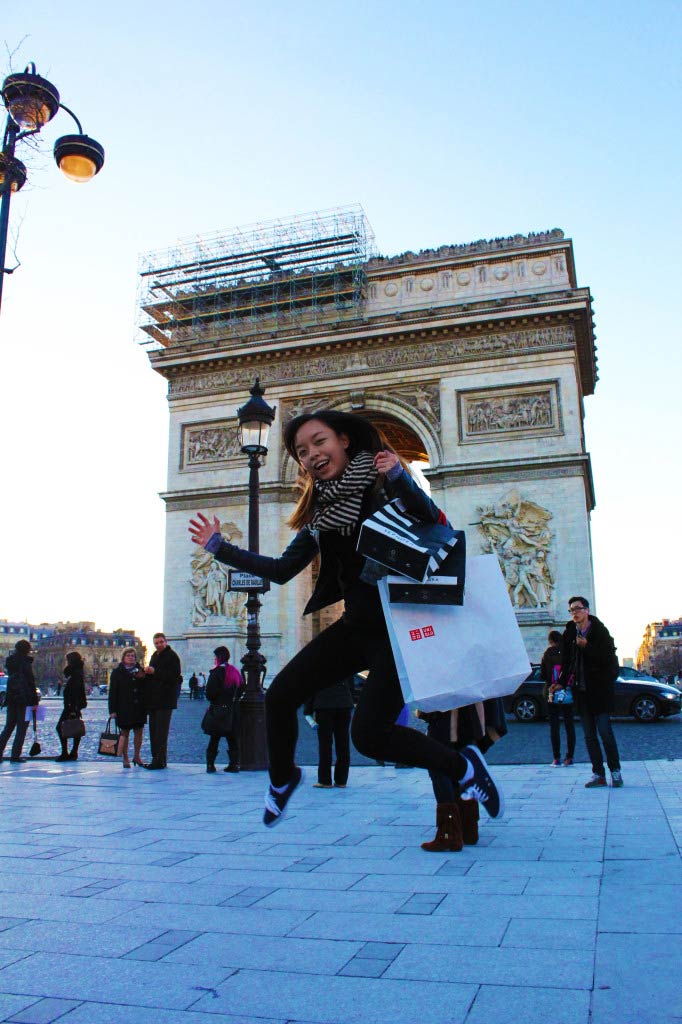 We went to the Avenue des Champs-Élysées and saw the Arc de Triomphe and bought plenty of things and took plenty of pictures. After, we went to get our keys at the apartment, bought some groceries and WOWED at how awesome and big our apartment was. We ate pizza that night and although the apartment was awesome and everything, we realized we had no hot water :C  #sadface 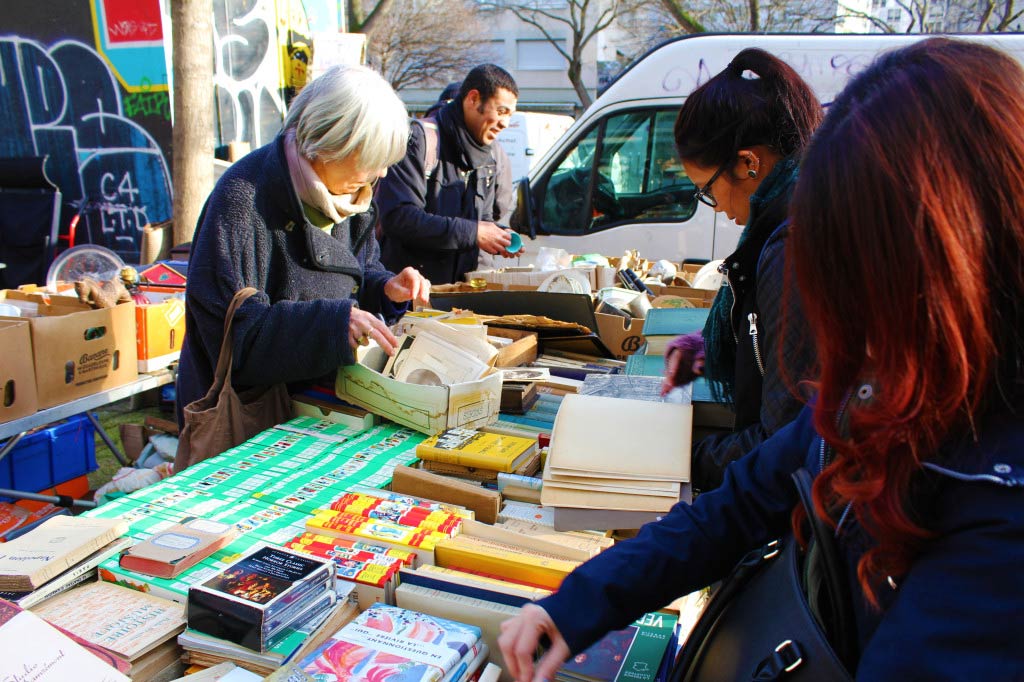 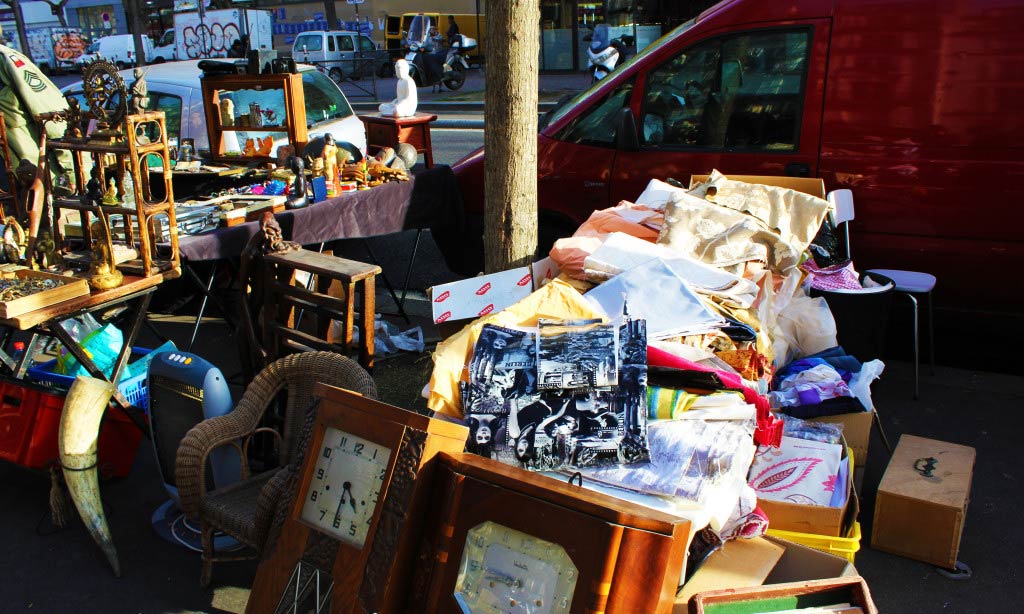 On Sunday, we found a small flea market on one of the streets near our accommodation and we took a quick browse before we headed to le Musée du Louvre. Keen for some Mona Lisa action! 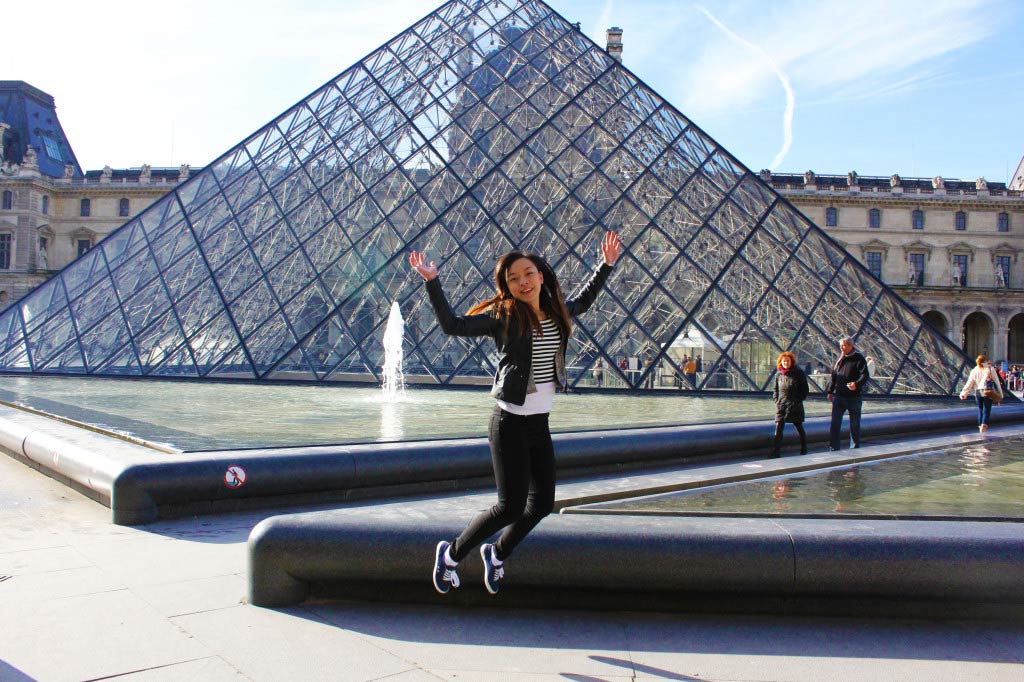 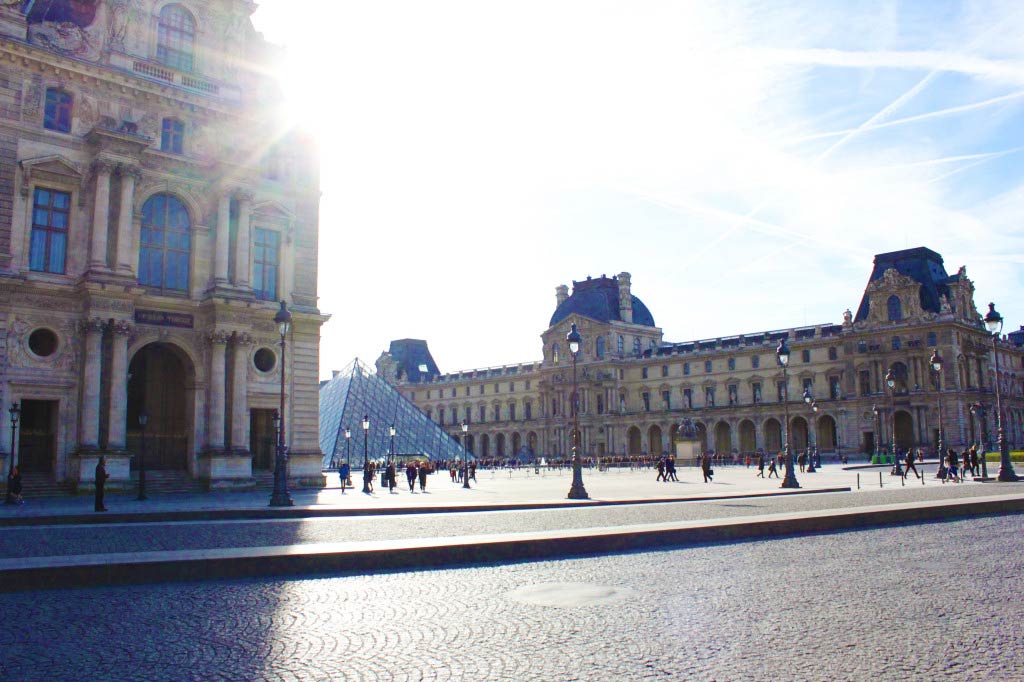 We met up with Gilbert and took lots of photos of the pyramids and then went in to the museum. It’s literally so big and when people tell you that you need at least a whole day to explore the museum, they really mean it. 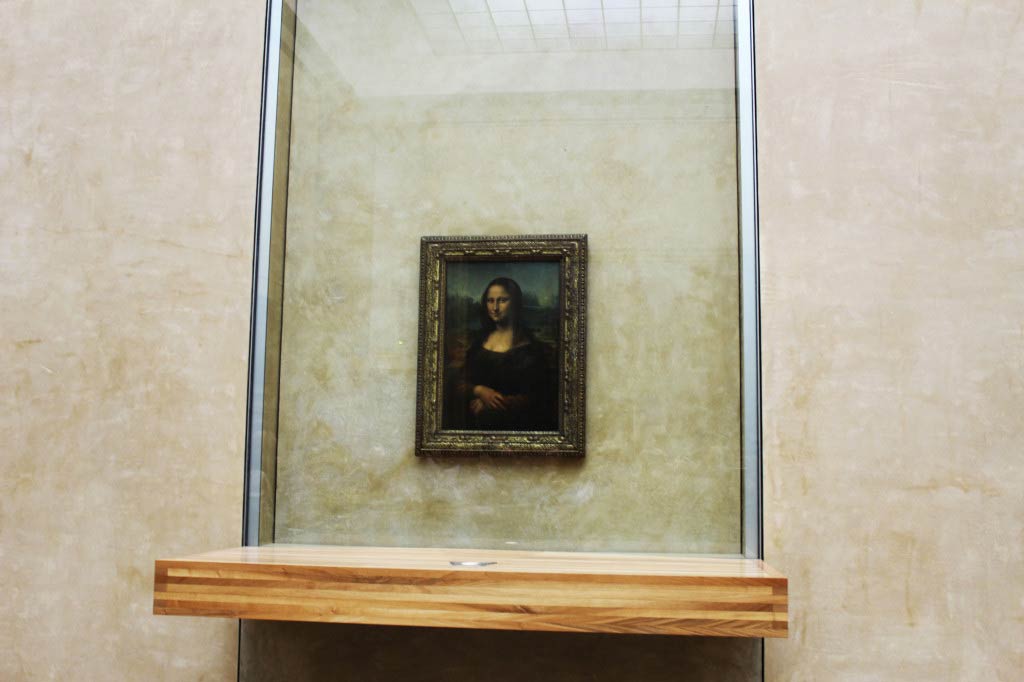 We finally found the Mona Lisa (I was a little under-impressed but whatever) and then we made our way to la Tour Eiffel (The Eiffel Tower if you’re English-inclined). 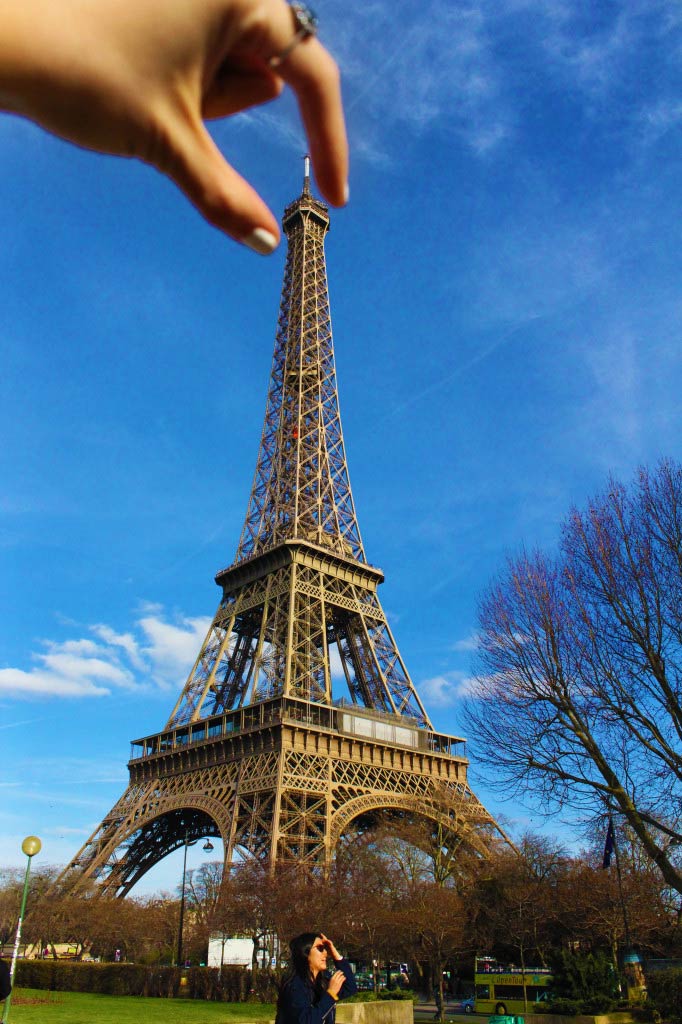 We were really UP CLOSE AND PERSONAL with le tour Eiffel as we exited from the subway station and BAM a whole lot of grey metal was forced upon our delicate little hearts. Some of us were underwhelmed, others were gasping at its structural beauty. 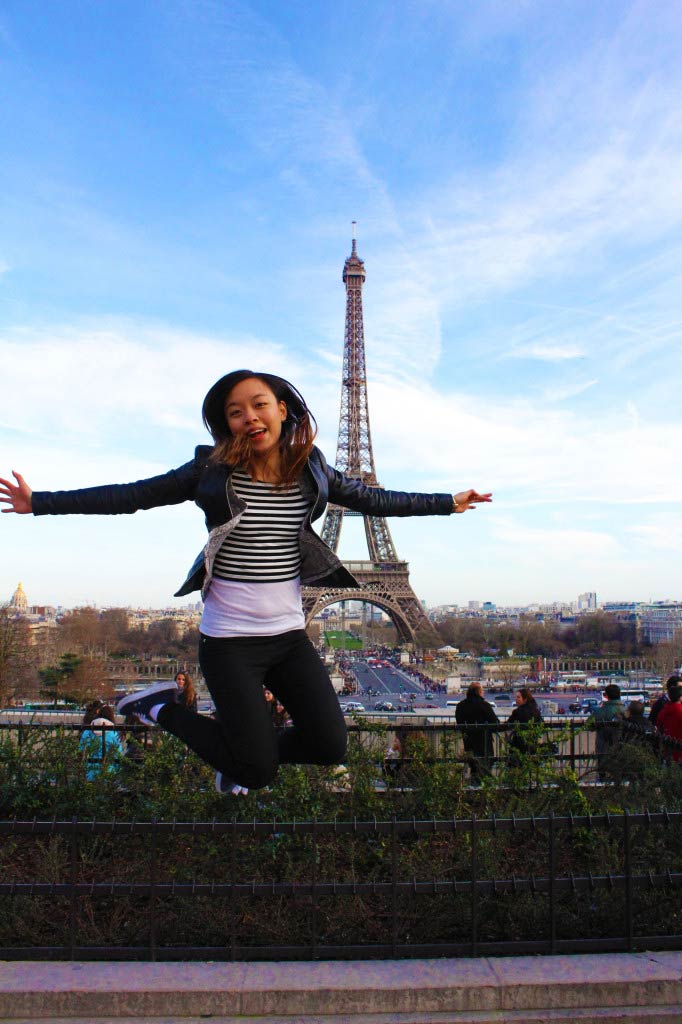 I don’t really know how I felt- I think the hype of it made it a little underwhelming and I thought that it would be a lot taller than it really was. But nevertheless, GOOD JOB FRANCE. Kay was also given a rose by some old guy who picked it up from the floor #howromantic.

So after taking about a million and one photos, we made our way to the Notre Dame which was super cool, although I’ve been to a few historical catholic churches since I’ve been in Europe and after a while they start to look the same. 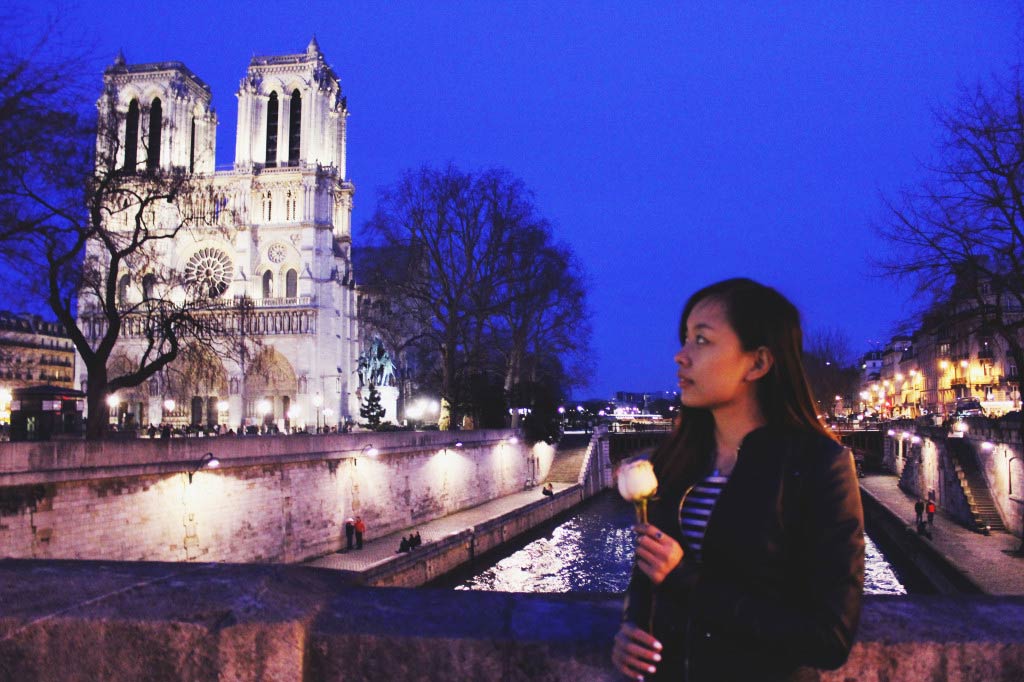 I took the rose from Kay so I could take this super nostalgic/reminiscent/incredibly corny photo by the River Seine and the Notre Dame. 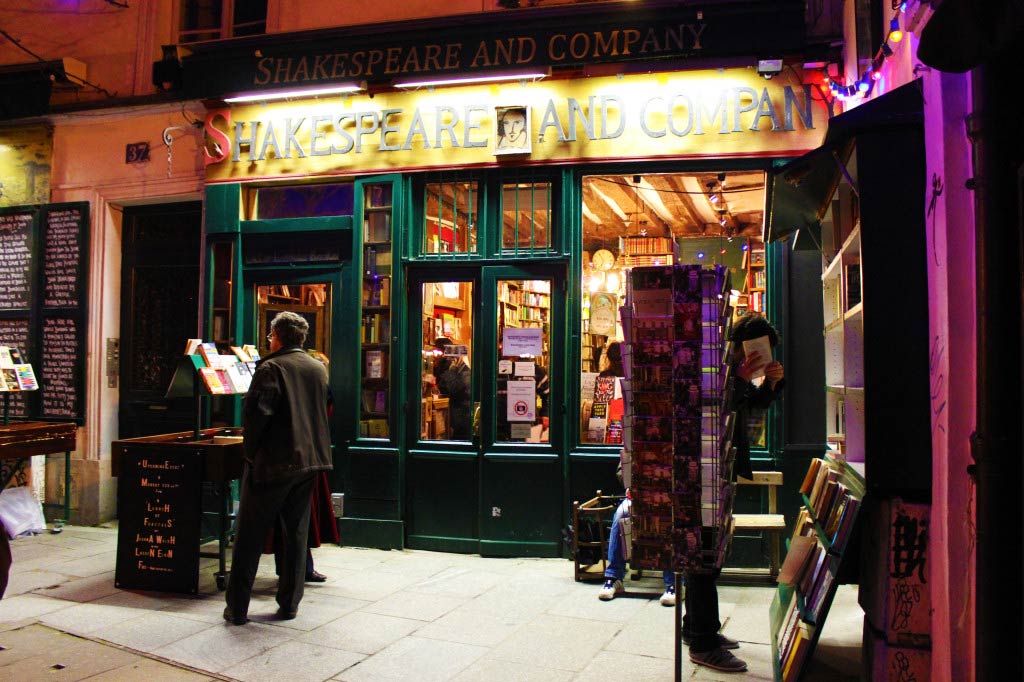 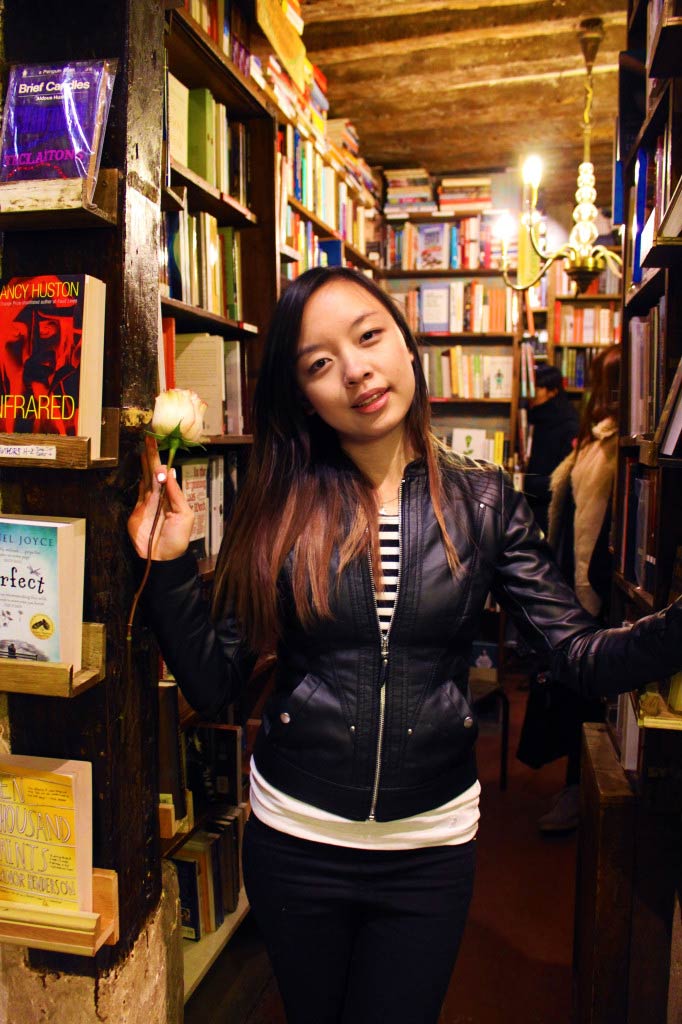 We then went to the Shakespeare and Company bookstore which was near the Notre Dame and I could feel myself falling in love with the place (despite the drunken people in the pub next door). Technically you’re not supposed to take photos in the bookstore but #yolo.

I bought two books: The Hunchback of Notre Dame by Victor Hugo (as I thought it would be a very memorable souvenir) and The Lover’s Dictionary by David Levithan (because Paris = Love). I also bought a really cool Tumblr-esque book bag (but I will save my France shopping haul for another blog post).

After our day of touristy experiences, we went back to our apartment after doing a bit of grocery shopping and we tried this thing called Speculoos for the first time. LITERALLY HAPPINESS IN A JAR. It’s like a biscuit tasting spread that kind of resembles peanut butter but better. If you’ve never tried it then you haven’t lived life.

Monday was a bit of a sad day. We all split up as 3 of the girls had a reservation for Hint & Hunt and Kay had a romantic little meeting with her French beau. So my friend Audrey and I decided to head to the Sacré Coeur which, little did we know, was in the dodgy arrondissement of Paris. We walked through a street filled with souvenir stores and beggars on the floor (there was a lady with no legs!) and as soon as we walked through the gates of the Sacré Coeur, these big black men tried to lure us with their so-called ‘friendly small talk’! As hard as we tried to get past them, they hooked us by the finger with some string and started twisting it to make a bracelet.

They took Audrey and I away from each other so we didn’t know what was happening (it was all so confusing!) and he asked about where I was from, whether this was my first time in Paris and if I had a husband (?). After, he tied the bracelet around my wrist and started ASKING FOR MONEY. I literally had only 10 Euros and 10 cents left and I told him “I HAVE NO MONEY” but he was like “YOU CAN GIVE HOW MUCH YOU WANT” so I went to get my wallet to give him the 10 cents but he saw the 10 euros and was like “GIVE ME THAT AND I’LL GIVE YOU CHANGE” but alas, I never got any change and I walked away frustrated, confused and poor. But whatever, at least I wasn’t kidnapped and thrown off a cliff. 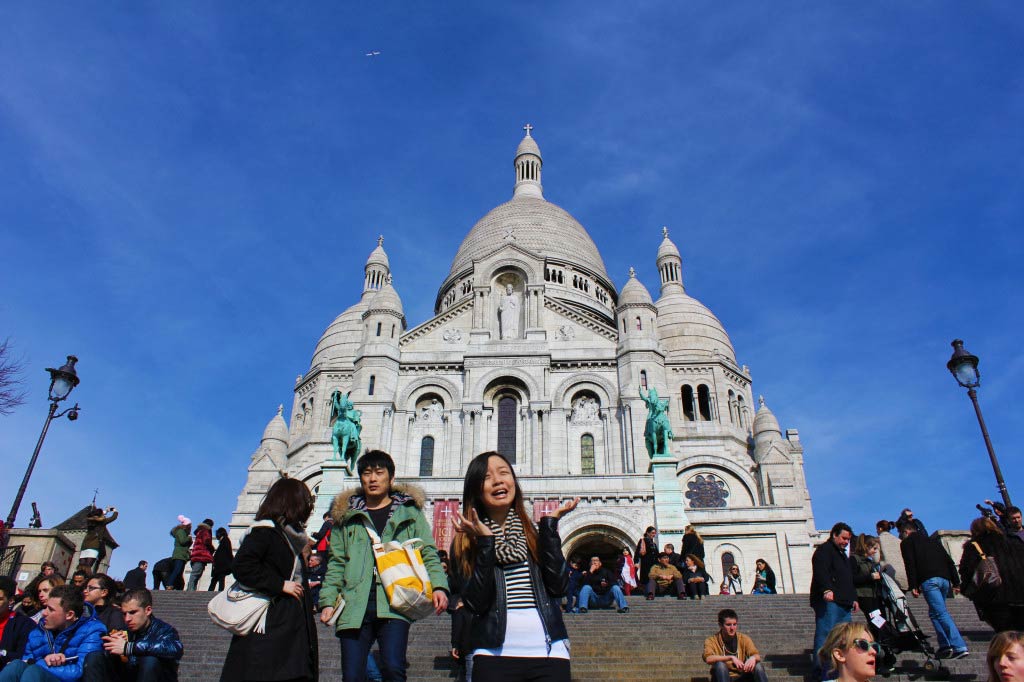 I couldn’t really enjoy the Sacré Coeur very much because Audrey and I were complaining the whole time, but I did manage to get a pretty cool picture (courtesy of Audrey). 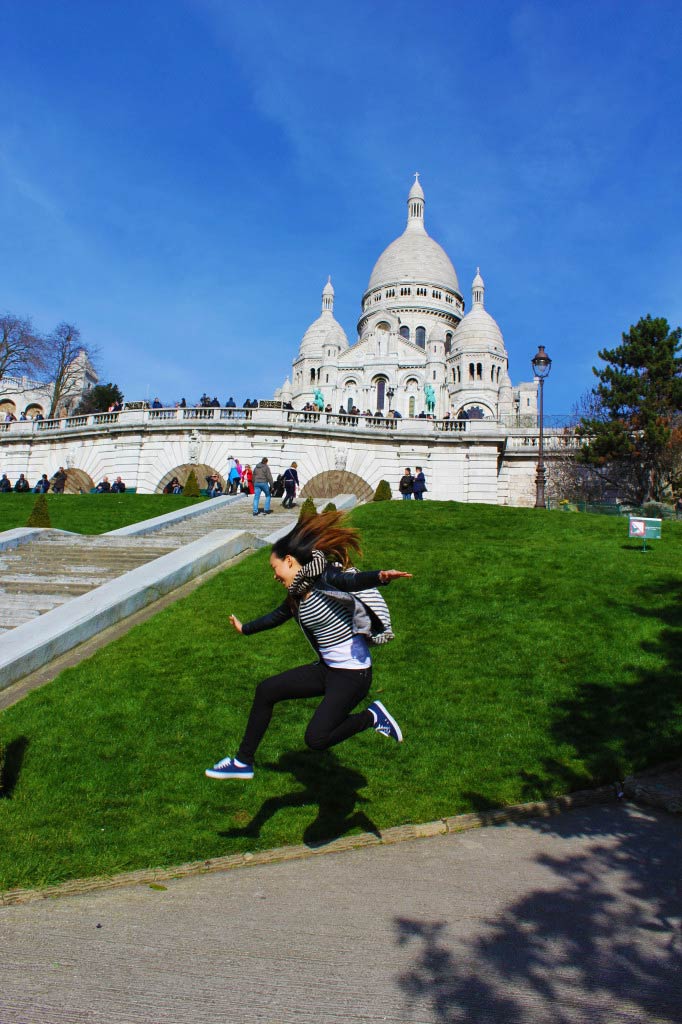 After, we went back to the Avenue des Champs-Élysées to get money out and go shopping (after I tripped over in the metro), but when I checked my phone, I had a text message from one of the other girls saying that ONE OF THEIR PHONES GOT STOLEN BY A DOUCHEBAG!!!!!!  NOT A GOOD JOB, FRANCE. Audrey and I went back to our apartment although we didn’t have the key to get in, so we sat in the lobby floor and ate bread like homeless people, while the others were at the police station filing a report and Kay was on her romantic rendezvous by the river with her French amour.

When the other girls came back, two of them had to go to the train station as that was their last day in Paris, so it was all really rushed but they thankfully made it on their train in time. There were only four of us left and we stayed indoors watching YouTube videos and creating lots of inside jokes #queldommage!

That night, Gilbert took us to China Town to have dinner with his family- the first decent Chinese food I’ve had since being in Europe! Yay!

We then went to la Tour Eiffel to see it lit up and sparkle at 11pm. It was magical- sans the weird black people trying to con us of our money by trying to force roses upon us. 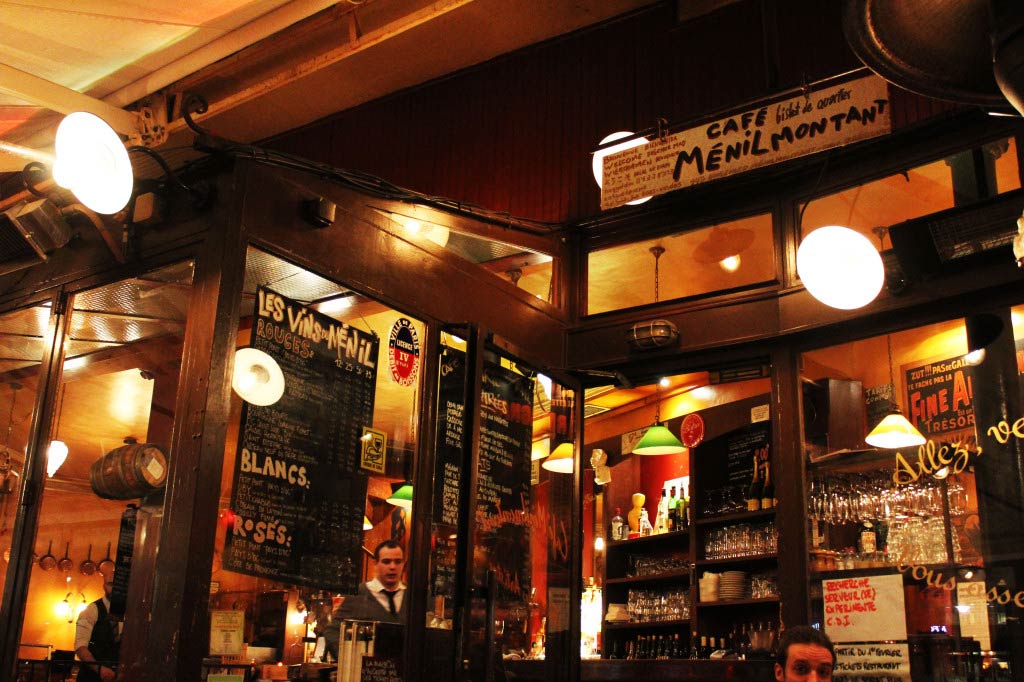 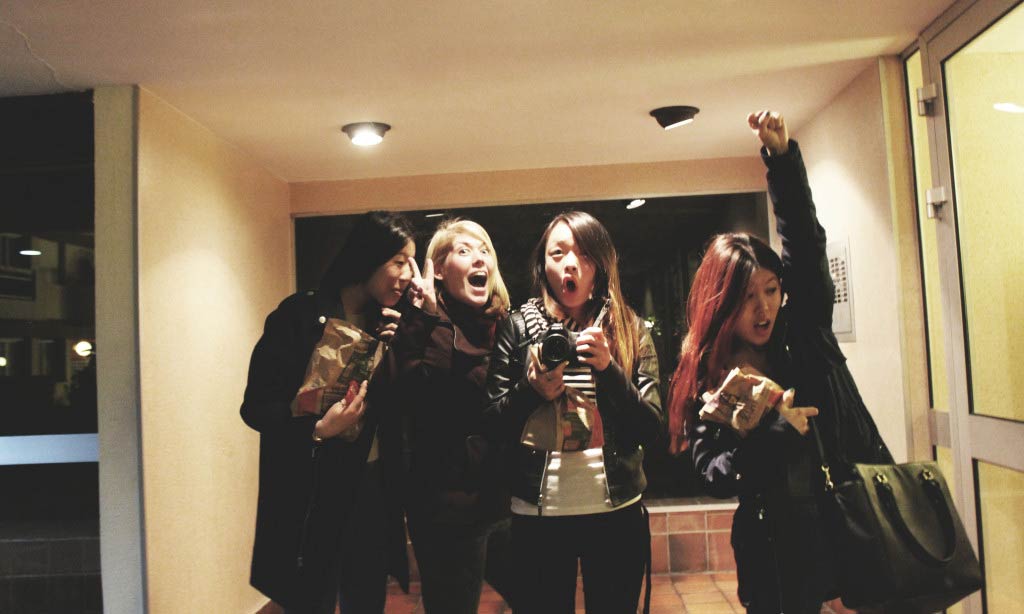 We went back to our arrondissement and had a few drinks- the waiter gave us free shots (I had half a cocktail and was seriously tipsy) and then had McDonalds and crashed back at the apartment.

Tuesday was our last day in Paris, so we checked out of the apartment and left our baggage at the lockers at the train station. After, we went shopping at Rue de Rivoli in Châtelet so that my friend Jullie could buy a new phone- unfortunately the phone she wanted only came in yellow (#queldommage).

Thus ends our trip to France.

I don’t know, I think I need a few weeks to process the fact that I was in Paris and that I saw la Tour Eiffel– it all happened so fast.

Here’s a vlog from the trip: